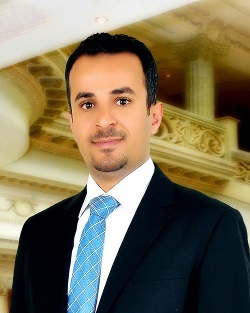 Note from the program: Since its launch in 2011, the Yemen Field Epidemiology Training Program (FETP) has produced 30 graduates, 14 of whom are currently working with the World Health Organization (WHO) in Yemen. One is working with UNICEF Yemen, some are directors of national programs, and one is working in Pakistan.

Thank you for participating in this series which intends to shine a spotlight on the impressive work of FETP graduates around the world. Congratulations on becoming the first FETP graduate in Yemen to hold the role of Director General for Disease Control and Surveillance in the country. Please tell us more about your professional journey leading up to this point.

First, I am pleased to participate in the Alumni Spotlight series. I studied and completed a bachelor’s degree in medical laboratories, then a master’s degree in biochemistry, and worked in the General Directorate for Disease Control and Surveillance in 2012 as a surveillance officer in the laboratory-based surveillance program before joining the Yemen FETP in March 2015.

During my FETP residency, I identified a lot of health programs. Because I was mostly the first in completing my tasks and deliverables in the FETP, I participated in many of these health programs’ activities and built good relationships with the program managers. This gave me extensive experience and knowledge of the details of the work in the General Directorate for Disease Control and Surveillance. After graduation, I was appointed as a National Coordinator of the Viral Hepatitis Control Program, the Director of the Cholera Control Program, a Junior Epidemiologist with the FETP, and, finally, the Director General for Disease Control and Surveillance.

How would you describe the surveillance situation in Yemen?

The situation of epidemiological surveillance in Yemen is particularly critical, particularly during the aggression against Yemen, which caused the disruption of the communications networks and Internet in several districts, the displacement of some surveillance focal points, and the destruction of some health facilities. However, we are making great efforts to access and collect data and information centrally, especially with the emergence of many outbreaks and epidemics such as cholera, measles, diphtheria, rabies, malaria and dengue fever. The General Directorate is also looking towards expanding and developing the electronic Integrated Disease Early Warning System (eIDEWS) to cope with this increasing number of cases.

Please tell us about some of the unique challenges you will face in your new role.

The most important challenges are as follows:

What do you find most fulfilling in your career?

Despite all the responsibilities and challenges and work pressures, I am in a position where I can contribute to decrease the suffering and pain of people, especially those who are poor and most affected by epidemics and diseases.

What was your most memorable FETP moment?

My most memorable FETP moments were when I was accepted to the FETP and at the moment of my graduation.

In general, what advice would you give to recent FETP graduates?

I advise them to take advantage of the opportunity to enroll in FETP, which many others wish to have, and to be serious in their studies because the country needs them—especially with the scarcity of skills and expertise in the country during this critical period.

Not a member yet?
Request invitation